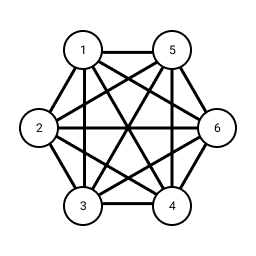 How many people must be at a party to guarantee that at least m people all know each other or at least n people all do not know each other? This is the Party Problem and is a fun result from the area of mathematics known as Ramsey Theory.

Consider the case m,n=3. We'll sketch a proof that the minimum required number of people to guarantee at least three people will all know each other or all do not know each other is six. 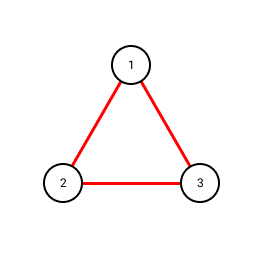 Red triangle represents all three people know each other 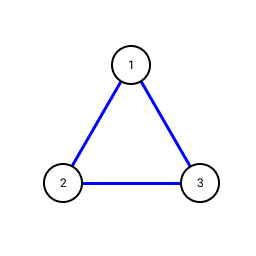 Blue triangle represents all three people do not know each other

First, we show a counterexample that the party must have more than five people. Here is a red/blue colouring of K5​ which does not contain a red or blue triangle: 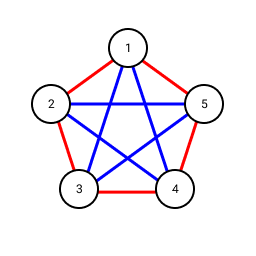 Now we must show that for any red/blue colouring of K6​ there must always be a red triangle or a blue triangle. Consider a node of K6​ and the colours of its five edges to the other five nodes in the graph: 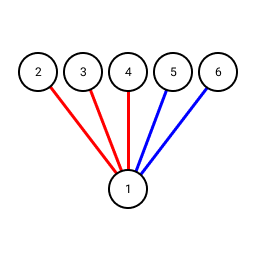 A node and its edge colours in K6​

By the pigeonhole principle there must be at least three edges with the same colour. Without loss of generality let us assume we are looking at node 1 and the edges to 2, 3 and 4 are red. If this is not the case we can relabel the nodes and reverse the role of red and blue to make this true. Now, consider the colours of the edges between nodes 2, 3 and 4: 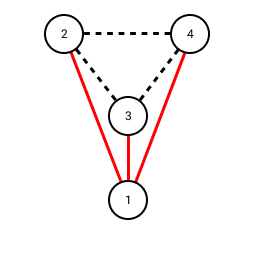 We have two cases:

More generally, Ramsey's Theorem states that for any positive integers m,n there exists a minimum number R(m,n) called a Ramsey number such that for any complete graph with R(m,n) vertices will contain either a red clique of size m or a blue clique of size n.

You can find some other Ramsey numbers at Wolfram MathWorld for example for a larger party to guarantee at least four people will all know each other or all do not know each other you would need a minimum of R(4,4)=18 people.

Back to all posts